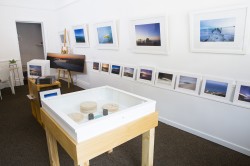 We're excited to announce the opening of our Box of Light Gallery at 1 Dowling Street, Dunedin. If you're curious about what our weekly dose of stoke might look like on your wall framed nice and big, then come in and check out some of our favourites.

All our premium prints are made with archival cotton rag paper and framed in conservation glass with archival matts. We also have prints mounted and ready to be framed from $49.

Gallery hours leading up to Xmas are from 12-5pm Wednedsday to Friday and 10am to 2pm on Saturday.

The shark attack on a 38-year-old bodyboarder on the New South Wales north coast on Saturday has added fuel to Australia's East Coast shark frenzy. There are a lot of wild theories flying around about why it is happening along with calls for shark culling to resume, new technology to be developed and implemented to protect beach users and a lot of nervous beach communities with waning beach tourism economies. Tracks Magazine team members Alex Workman and Mat Macready released this interesting short doco on the problem and explored some possible solutions.

Certainly some interesting times over there and a tough space to be in. Sea lions, seals and leopard seals suddenly don't seem too bad.

Teahupoo, Tahiti, is a pretty crazy place at the best of times, but when Italian surfer Niccolo Porcella let go of the rope on July 22, 2015, we're pretty sure he didn't plan on getting one of the best entries of the year to the TAG Heuer Wipeout of the Year category of the 2016 WSL Big Wave Awards.

This is lobster diving at its best and the scariest thing we've seen in a long time.

Box of Light heads to Samoa

Talofa! Box of Light is in Samoa this week. We will be focusing our lenses on the surf and surfers of Upolu’s southern coastline – an area renowned for its quality reef breaks. We're travelling with a bunch of surfers from Raglan – some serious rippers – and the swell is looking pretty serious with Tahiti's Teahupo'o Pro set to start on Monday.
While in Samoa we will explore Samoa’s coastline with some diving, snorkelling and fishing excursions around the islands. This is our first time in Samoa – it's going to be a marked change in climate from the winter in Dunedin where it was snowing a few days ago.
I'll be shooting with my Canon EF 70-200mm f/2.8L and EF 300mm f/2.8L lenses from the boats and I have three ports for my Aquatech water housing so I can shoot with the Canon EF 14mm f/2.8L, EF 50mm f/1.4 and the EF 70-200mm f/2.8L depending on the conditions.
A huge thanks to Island Holidays, Salani Surf Resort and Tourism Samoa for supporting this trip.
Now, where's that hammock?